What caused Luna and UST to plunge?

By news tets - May 14, 2022
The balancing algorithm between Terra (Luna) and UST fluctuated wildly, causing both cryptocurrencies to lose most of their value, despite efforts to contain them.

A series of stablecoins (stablecoins) are under scrutiny after regulators and investors watched the UST plunge from a fixed dollar of one dollar to just $0.03 on May 13. Meanwhile, the price of Terra (Luna), the cryptocurrency tied to UST, also fell vertically from $77 to $5 in the middle of the week and is less than $0.1. 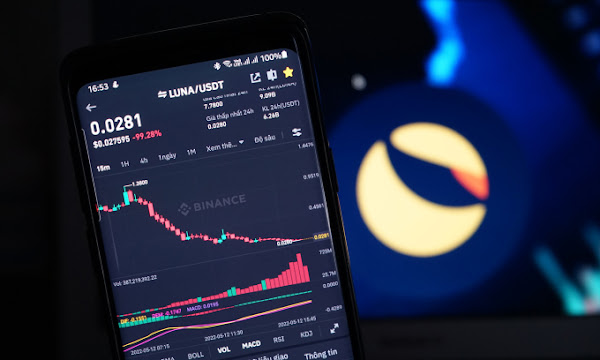 The collapse of UST and Luna caused investors to lose billions of dollars, and also affected a series of other cryptocurrencies. Many people question the claims of cryptocurrency developers that they can build a new form of finance, unaffected by uncertainties from banks in the traditional financial world.

Cryptocurrencies like Bitcoin are volatile digital assets that can fluctuate wildly in a very short time just by things like a tweet from Tesla CEO Elon Musk.

Stablecoins are designed to mitigate that risk. They are digital currencies developed on blockchain and have stable value because they are pegged to the value of fiat currencies like USD or Euro. In theory, a stablecoin should be worth the equivalent of a dollar, regardless of how other cryptocurrencies fluctuate.

Stablecoins have become a staple of the crypto ecosystem over the past two years, with traders and investors amassing around $180 billion in stablecoins as of mid-May.

How does UST stablecoin work?

Currently, there are two main stablecoins. The first is one backed by a reserve asset like fiat money, bonds, commercial paper, or even other crypto tokens. Tether (USDT), USD Coin (USDC) or Binance USD (BUSD) fall into this category.

The latter builds a "decentralized" algorithm, typically TerraUSD (UST). These stablecoins are not held in reserve, rather their value is maintained by a complex mechanism that involves swapping with a freely floating cryptocurrency to control the supply.

Luna is the project governance token of the Terra blockchain, which plays an important role in the UST and its stablecoins. In principle, UST is the material to make Luna and vice versa, Luna is also needed to cast UST. The correlation between the supply of Luna/UST will maintain the UST rate approximately to the USD.

When the UST price is low, players will buy it and change it to Luna to make a profit. Conversely, when the price of UST is high, players can exchange Luna equivalents of one USD into one UST to eat the difference.

Luna has a strong connection to UST. This token has a total supply of one billion coins. If the network exceeds a billion, the Terra network will burn Luna until the supply returns to balance.

Terra was created by Terraform in 2018 with two founders, Do Kwon and Daniel Shim. The Terra network uses the DPoS consensus mechanism, which allows smart contracts to generate various stablecoins.

The reason why Luna lost her value

The catalyst for the plunge was a series of large withdrawals from Anchor Protocol, a form of crypto-banking founded by Terraform. Such platforms are used by investors to profit by lending cryptocurrencies.

As of early May, investors have poured more than 14 billion USD in Luna money into Anchor. Much of the stablecoin supply is also on the platform.

The large volume of transactions on Anchor causes the balance algorithm between UST and Luna to fluctuate sharply, causing de-peg status for UST. De-peg is the term for a token that no longer holds a previously fixed rate on a currency.

When the UST is de-peg, the player still converts the UST to Luna according to the correct balance algorithm to reduce the supply. However, the sudden increase in the amount of UST transfers led to a sharp drop in the price of Luna. As a result, UST could no longer maintain the level of one USD/dong and Luna also collapsed.

The volatility created a turnaround reaction, causing more and more investors to withdraw UST from Anchor to sell. The amount of UST stored at Anchor plummeted to only about $1.6 billion as of May 13.

Impact on other cryptocurrencies

Developer Do Kwon once founded the non-profit Luna Foundation Guard (LFG) fund with a reserve capital in Bitcoin and various cryptocurrencies with a total value of three billion USD. This source of money has almost dried up after an urgent effort to keep the price of UST in the past week. The fact that LFG sold a large amount of Bitcoin for payment also caused the price of this digital currency to plummet. Bitcoin bottomed below $26,000 on May 12, the same period when UST and Luna fell the fastest.

Do Kwon was trying to raise public support after the sell-off of UST and Luna, but many people sold out of both because they thought they would not be able to recover to their original value. Even the most ardent crypto advocates admit the incident has shaken their faith.

The collapse of Luna and UST also caught the attention of US lawmakers, revolving around a lack of regulation governing stablecoins and the cryptocurrency market in general. US Treasury Secretary Janet Yellen on May 10 called on the US Congress to soon pass regulations controlling stablecoins. Congressman Pat Toomey, the Republican leader on the US Senate Banking Committee, also expressed his intention to push for related legislation.