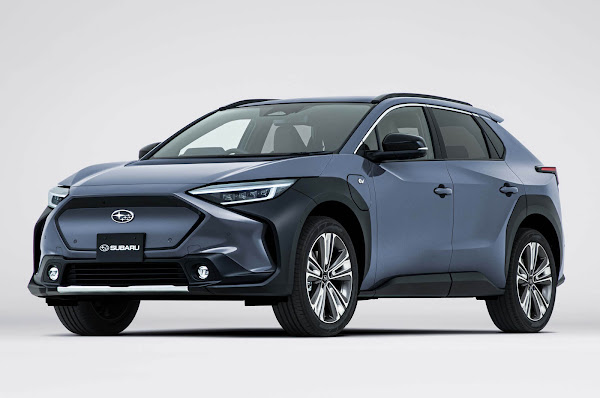 The upcoming Subaru Solterra will be the brand’s first fully-electric car and it’s set to launch in July this year.

The Japanese firm has also revealed pricing for its electric SUV. Starting from £49,995, the Solterra will offer fresh competition for the likes of the Ford Mustang Mach-E and the Skoda Enyaq iV.

Sharing its mechanicals (and most of its body panels) with the new Toyota bZ4X SUV, the Solterra also gets the same 71.4kWh battery pack, and will be available with the same choice of two powertrains.

The entry-level Limited model will have a single-motor system, which produces 201bhp and 336Nm of torque and has a maximum range of 289 miles. Above that, there’s the Touring model which offers a dual-motor system with four-wheel-drive and a combined output of 215bhp. However, the extra energy demand on the battery means that the flagship’s maximum range drops to 257 miles.

In terms of performance the dual-motor Solterra can accelerate from 0-62mph in 6.9 seconds and will top out at 100mph. It also comes with an X-Mode AWD drivetrain setting, which Subaru says was designed for rough roads. The system can distribute the torque between the front and rear axles to provide the most grip possible.

Subaru says the Solterra’s 150kW fast charging capability allows for 20 to 80 per cent charging in 19 minutes.

Go up to the Touring specification and you get 20-inch wheels, synthetic leather seats, a fixed panoramic roof, Harman Kardon sound system and wireless phone charging.

The Solterra is 4,690mm long, 1,860mm wide and 1,650mm tall, which makes it around the same size as the current-generation Forester. The finished Solterra has also adopted some of the bold styling cues from the brand’s EV concept car that was unveiled in 2021.

For example, the huge black wheelarch extensions and sharp headlamps have both made their way on to the finished Solterra, although the angular front end has been toned down slightly, probably in the interest of pedestrian safety.

Inside, the Solterra is similar to the Toyota bZ4x, with the two cars sharing the same digital instruments, high centre console and enormous Tesla-esque infotainment system in the centre of the dashboard. Boot space is also the same as the Toyota bZ4x’s at 452 litres.