"You can't flip a switch overnight and run a G20 economy on cryptocurrency."

The US and its allies continue to expand sanctions against Russia in response to its ongoing invasion of Ukraine -- blocking state-owned companies and central banks abroad, limiting exports of vital technology and freezing the assets of President Vladimir Putin's allies. 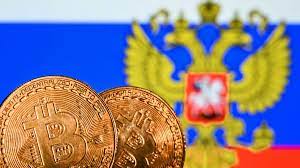 "These individuals have enriched themselves at the expense of the Russian people, and some have elevated their family members into high-ranking positions," read a White House release last week that singled out telecom magnate Alisher Usmanov, worth a reported $14.5 billion, and several other Russian elites.

"Others sit atop Russia's largest companies and are responsible for providing the resources necessary to support Putin's invasion of Ukraine."

But questions have arisen about whether the government in Moscow, Russia's state-owned corporations and wealthy oligarchs can sidestep the financial squeeze of sanctions with cryptocurrencies, which operate on decentralized networks that ignore international borders.

Here's what you need to know about whether Russia can capitalize on cryptocurrency to circumvent economic sanctions.

Unlike traditional money, which requires a government or bank to maintain its value, cryptocurrency is a decentralized digital payment system that can be sent by anyone to anyone in the world.

The process is encrypted, theoretically making it both safer and harder to track than traditional financial transactions.

As with stocks, the value of cryptocurrency is ultimately determined by what people are willing to pay for it -- though crypto is much more volatile.

In theory, cryptocurrency allows you to sidestep banks and governmental regulators with direct peer-to-peer transfers.

There is precedent: In May 2021, blockchain analytics company Elliptic reported that Iran was bitcoin-mining to generate hundreds of millions of dollars.

"Bitcoin-mining represents an attractive opportunity for a sanctions-hit economy suffering from a shortage of hard cash, but with a surplus of oil and natural gas," the firm wrote in a blog post.

And a United Nations report from February indicated that North Korea used as much as $400 million in stolen ether, bitcoin and other cryptocurrencies to finance its nuclear and ballistic missile programs, in defiance of UN sanctions.