What happens to the stock market when the Fed raises interest rates?

In theory, stocks should perform worse when the Federal Reserve raises interest rates.

The common convention is as follows: If the Fed raises what's known as the Federal Funds rate – the interest rate commercial banks charge each other to borrow money – to compensate banks must raise interest rates on loans to businesses and individuals. 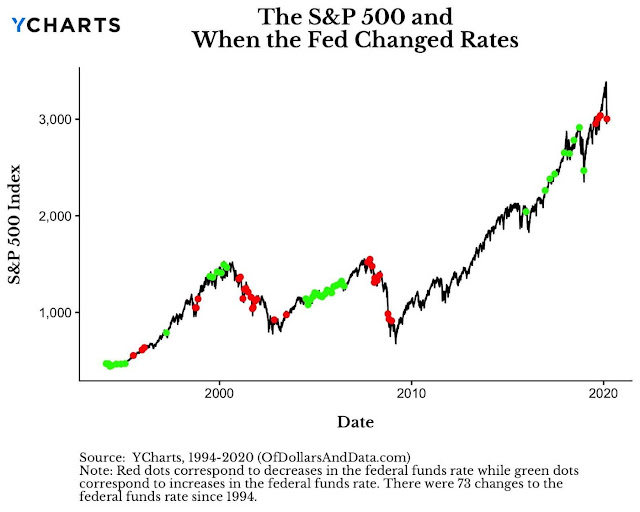 After trading higher leading up to the decision, the Dow Jones industrial briefly turned negative but closed 1.6% higher, or 519 points, Wednesday. The S&P 500 and Nasdaq composite nearly wiped away their gains from earlier in the day. But both indices reversed course toward the tail end of trading and closed higher.

CREDIT CARDS, MORTGAGES: How Fed's first rate hike in more than 3 years will you

The yield on the 10-year Treasury rose to 2.17%. That's the highest level 10-year bond yields have been since June of 2019. The Fed is also forecasting an additional six rate hikes this year.

Federal Reserve Chairman Jerome Powell told reporters the Fed's policy changes have been "priced into the market for a few months now," and that Wednesday's market moves are not indicative of the effect of raising interest rates.

But, against common convention, stocks have tended to move higher after the Federal Reserve raises rates.

Since 1990, there have been four tightening cycles where the Fed has raised interest rates multiple times over a one- to three-year period.

By the end of each cycle, the S&P 500 saw positive annual returns, according to research conducted by Steve Bruce, senior investment consultant at Northwestern Mutual Wealth Management Company.

Is that to say that investors can sit back and watch history repeat itself as the Fed continues to raise rates? Not quite. How the Fed's decision on interest rates affects stocks

In the immediate month following a rate hike, history is pretty much useless if you're trying to find clues on how stocks will move, said Craig Lazzara, managing director in core product management at S&P Dow Jones Indices.

Lazzara and his colleague Fei Mei Chan through their research found no monthly correlation between changes in yields on 10-year notes, which typically rise when the Fed raises rates, and changes in stock prices from 1990 to 2021.

Even the three months following a rate hike may be pointless to try to read too much into.

"However, investors were rewarded if they held through those initial-hike market jitters, with better than 50% of asset classes outperforming their historical average returns over multiple time periods.

For instance, growth stocks, which are companies that produce above-average returns compared to overall market performances, have tended to fare the worst in three months following a rate hike. But three years after the initial hike, growth stocks had some of the highest returns across the 12 asset class groups, Bruce tracked.

Value stocks, which are companies that seem to be trading at bargain prices relative to their future earnings potential, performed the best three years after rate hikes, according to Bruce's analysis.

Gargi Chaudhuri, head of iShares investment strategy for the Americas at BlackRock, is recommending her clients put more money in value stocks, which often include banks and energy companies, given their past performance.

"These exhibit higher sensitivity to higher interest rates," she said, meaning they're likely to perform better when interest rates rise.

Raising rates to fight inflation is complicated by war in Ukraine

Basing your investment decision off past market performance is dangerous, said Kevin Gordon, senior investment research specialist at Charles Schwab. It's impossible to make a perfect apples-to-apples comparison between how stocks performed a decade, or even a year ago, versus how they'll perform now because economic conditions aren't identical.

And it's even more dangerous nowadays, he said.

The war in Ukraine is set to send inflation even higher, especially as U.S. consumers are paying more than $4.31 per gallon of gas on average, according to Wednesday data from AAA.