Only a year ago Chinese stocks in the U.S. were enjoying an unprecedented boom.

Now they’re mired in a 72% plunge that’s on the cusp of matching losses during the 2008 financial crisis -- and within spitting distance of the Nasdaq Composite Index’s 78% peak-to-trough slump during early 2000s dot-com bust. Alibaba Group Holding Ltd. alone has lost nearly $500 billion of value since mid-February, the biggest wipeout of shareholder wealth worldwide. 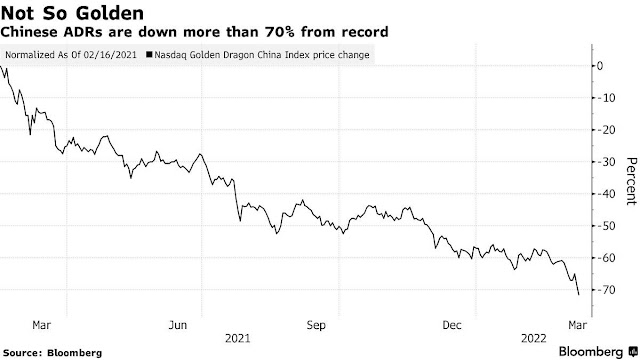 The dramatic turnaround started last year after Xi Jinping cracked down on tech firms. Losses have accelerated amid concern Xi’s alliance with Russia’s Vladimir Putin will damage China’s global standing. The growing risk of Chinese firms delisting from the U.S. have also weighed on stocks. The rout has upended a raft of optimistic forecasts across Wall Street and raised questions about the viability of a market that has financed some of China’s most important companies.

The losses in Russia are having a “huge psychological effect” on portfolio managers, says Jonathan Brooke, founder and principal of Brooke Capital Ltd. in Hong Kong.

The following is a breakdown of the bull and bear cases for U.S.-listed Chinese shares after their historic plunge.

Bulls point to China’s ambitious growth target and historically low valuations as reasons why the selloff may be overdone.

Earlier in March, Beijing announced a gross domestic product growth goal of about 5.5% for 2022, at the higher end of many economists’ estimates. The growth target suggests the credit cycle is on the upturn and the economy will likely start improving as early as the second quarter, Macquarie Group Ltd. economists Larry Hu and Xinyu Ji wrote after the target was set.

A Bloomberg Economics index shows China’s credit impulse -- which in October fell to the lowest in 10 years -- has started to reverse. The measure tracks the growth in new financing as a share of gross domestic product. This will be a year of “leveraging up,” the Macquarie analysts wrote.

Valuations are low. The Nasdaq Golden Dragon China gauge trades at 17.4 times projected earnings, down from about 52 times last year. The measure is cheaper than the S&P 500 Index for the first time in almost eight years.

The prospect of Chinese tech firms being forced to delist is adding to the sense of panic among investors. Last week, the SEC named its first batch of Chinese stocks as part of a crackdown on foreign firms that refuse to open their books to U.S. regulators. The newly identified firms could be subject to delisting from U.S. exchanges if they fail to comply with auditing requirements for three consecutive years.

“The concentration in tech in the bull market was so intense and funds have been so long growth tech stocks that you will find quarter-end retail redemptions will weigh heavily on the market,” according to Brooke, who has over 30 years of experience in investment management and has followed Asian stock markets since 1990.

China is also battling to maintain its Covid-Zero policy in the face of a growing omicron outbreak. Authorities locked down the city of Shenzhen on Sunday, after neighboring Hong Kong was overwhelmed by infections and one of the world’s highest death rates.

This is likely to further weaken domestic consumption. Data this week will likely show retail sales increased just 3% year-on-year in the first two months, according to the median economist estimate.

What to watch next

U.S. and Chinese regulators are believed to be having “earnest” discussions with an aim to resolve the auditing dispute, Wang Sheng, head of the investment banking division at China International Capital Corp., said in an opinion piece published by the Economic Daily on Sunday. Wang said the regulators should be able to strike a deal. The newspaper is affiliated with the State Council, China’s cabinet.