The price of Bitcoin has seesawed over the past month. A number of Bitcoin stocks — or companies that have business tied to the cryptocurrency — have wobbled as well.

Given the on-a-whim price swings in the crypto world, finding the best stocks out of that bunch can be difficult. 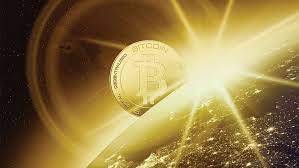 Bitcoin's gyrations have arrived as Russia's invasion of Ukraine brings the cryptocurrency's different investment narratives to the forefront.

The price of Bitcoin, at times since the invasion, has fallen as more traditional investors dump what they consider a volatile "risk asset" in a time of rising prices and economic uncertainty.

At other moments, its price has rebounded, amid signs ordinary people in the two nations may have been using crypto to shield their money as the currencies in both reel.

The order directed regulators to "develop policy recommendations to address the implications of the growing digital asset sector and changes in financial markets for consumers, investors, businesses, and equitable economic growth." Bitcoin's price jumped on the news.

Prior to the invasion, the industry had made progress toward mainstream adoption. More exchange traded funds tied to Bitcoin futures and companies — the closest things to a direct Bitcoin ETF — have debuted recently. Major corporations are taking interest.

Among other Bitcoin-related ETFs, Invesco Alerian Galaxy Crypto Economy ETF (SATO), made up of shares of companies engaged in crypto-related activity, also debuted in October.

So did the Volt Crypto Industry Revolution and Tech ETF (BTCR), which also gives investors access to Bitcoin-exposed companies.

Grayscale has filed to convert the Grayscale Bitcoin Trust (GBTC) into a spot Bitcoin ETF. But the SEC has concerns, and has pushed back its decision on the matter.

The way Bitcoin and cryptocurrencies are used now — largely for investing — is also a big departure from Bitcoin's original intent as a currency, free from central banks, that people could use to buy things.

Observers also still raise concerns about security, market manipulation, and whether cryptocurrencies, and by extension Bitcoin stocks, have a place in mainstream investing.

More regulation could hasten adoption. But it could dampen some of the big gains that have made Bitcoin popular.

Other Bitcoin stocks serve as cryptocurrency's financial plumbing. Silvergate Capital (SI) is known as a "crypto bank" and runs a digital-currency exchange platform.

Coinbase is a leading Bitcoin and cryptocurrency exchange, and makes money from fees on transactions. But the companies' stock prices are still affected by the day-to-day fluctuations of Bitcoin and other crypto prices.

Other companies, like the trading platform Robinhood (HOOD), can sometimes function as crypto stocks. Block (SQ), formerly known as Square, as well as PayPal (PYPL) also allow their users to buy Bitcoin.

Coinbase last month reported fourth-quarter results that soundly beat expectations. However, the company noted that for the first quarter, it had seen "a decline in crypto asset volatility and crypto asset prices compared to all-time high levels in Q4 2021."

The company has said it wants to become the "Amazon (AMZN)" of digital assets.

But putting more of those assets on its platform could bring complications with compliance, and currencies that pose bigger risks to investors.