U.S. equity futures slipped Friday and Asian stocks made modest gains as traders monitored Russia’s war in Ukraine and mixed signals on peace talks that pushed oil above $100 a barrel. 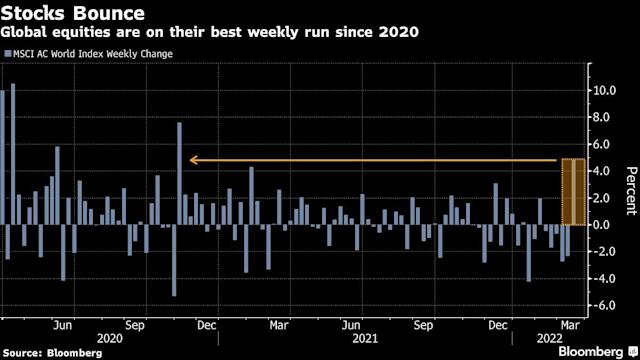 Equities were up in Japan, Australia and South Korea. S&P 500 and Nasdaq 100 contracts fell after the best three-day rally in U.S. stocks since 2020

Futures pointed lower for Hong Kong’s open later. U.S.-traded Chinese shares on Thursday snapped an historic climb as investors wait for Beijing to follow up on its vow to stabilize China’s markets.

The war in Ukraine and the sanctions imposed on Russia continue to shape sentiment. JPMorgan Chase & Co. processed funds for interest payments due on Russian government dollar bonds, easing some fears of a default.

Oil extended a surge after the Kremlin cast doubt on how much progress ongoing cease-fire talks are making. The war has severely disrupted Russian crude flows. The Pentagon warned Russian President Vladimir Putin may threaten to use nuclear weapons if the conflict drags on.

Treasuries inched higher and the dollar dipped. The yen was steady ahead of the Bank of Japan policy review, which is set to stick with monetary easing.

Global stocks have rebounded in recent days, putting them on course for their best week since November 2020. That suggests some of the worst fears about the inflationary commodity shock and hit to confidence from the war have eased. At the same time, the continued fighting and tightening Federal Reserve monetary policy point to the likelihood of more cross-asset swings ahead.

“I don’t necessarily expect the rest of the year to be that easy,” Lori Calvasina, head of U.S. equity strategy at RBC Capital Markets LLC, said on Bloomberg Television. “Volatility is likely to stay elevated for quite some time” even as sentiment gauges “have been a screaming buy in some respects for quite some time.”

President Joe Biden and his Chinese counterpart Xi Jinping are due to discuss the war later Friday. The Biden administration is concerned that Xi may be moving closer to supporting Moscow. The U.S. president will warn of “costs” if China backs Russia, Secretary of State Antony Blinken said.

The latest U.S. data showed factory output rose by the most in four months, while new home construction rebounded in February. That buttressed Fed Chair Jerome Powell’s view that the world’s largest economy can handle a campaign of monetary tightening to fight high inflation.