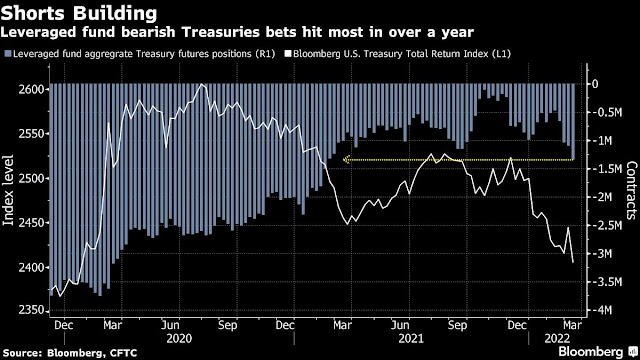 The 9% plunge in a gauge of Chinese tech firms reverberated around the region, leaving an Asia-Pacific equity index in the red for a second session. A Covid lockdown in Shenzhen, a tech hub, added to the geopolitical and regulatory risks facing the sector in part from strained ties between the U.S. and China.

A climb in Japanese shares amid a weaker yen and gains for S&P 500, Nasdaq 100 and European futures eased some of the gloom. Investors were parsing efforts at diplomacy as Russia continues its war in Ukraine, as well as comments from a U.S. official that Moscow asked China for military assistance.

Treasuries extended a rout, taking the five-year U.S. yield above 2% for the first time since May 2019. The Federal Reserve on Wednesday is expected to begin a cycle of rate increases to curb inflation, starting with a 25 basis-points move. Price pressures were already high before the conflict and the isolation of resource-rich Russia upended commodity flows.

Crude dropped while remaining above $105 a barrel. The dollar climbed, commodity-linked currencies weakened and gold retreated. The ruble was indicated slightly higher versus the greenback.

The flattening U.S. Treasury yield curve, and a 12% drop in global stocks this year, signal worries that receding stimulus and higher costs for energy, grains and metals may throttle the world economic recovery. Investors are also waiting to see if Russia defaults on its international debt after losing access to almost half of its foreign-exchange reserves.

“We are experiencing extraordinary volatility in global equities compounded by wavering market sentiment, and the risk of recession intensifies on spiraling commodity prices,” Louise Dudley, portfolio manager for global equities at Federated Hermes, wrote in a note. “We expect ongoing swings in the short term as geopolitical uncertainty over Russian crude persists.”

The Fed is the drawcard among eight Group-of-20 members whose monetary officials are due this week to assess economic prospects.

nancial economy,” Karen Harris, Bain & Co. global head of macro research, said on Bloomberg Television. “You have mainstream struggling with inflation -- that’s why we are set to see these rises coming in March. On the other side we are trying not to prick the financial economy. Either path is deflationary, recessionary.”

While the U.S. and some other nations are tightening monetary settings, speculation is growing that China will introduce more easing to alleviate a slowdown. The yuan and China’s 10-year government bond yield retreated.