Stocks jumped Thursday after the Federal Reserve said the U.S. economy can weather its campaign against high inflation, though a flatter Treasury yield curve highlights worries that growth may not be so resilient. 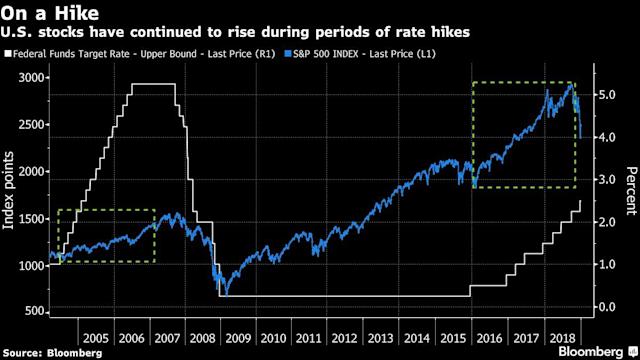 Equities climbed in Japan, South Korea and Australia. S&P 500 and Nasdaq 100 futures edged up after a Wall Street surge that took the broad U.S. market to its best two-day gain since April 2020.

The Fed raised rates by a quarter percentage point and signaled hikes at all six remaining meetings in 2022. Chair Jerome Powell said the U.S. economy is “very strong” and can handle monetary tightening.

Treasuries made modest gains and the yield curve remained flatter. For some, the latter underscores lingering worries that the Fed will struggle to restrain price pressures absent a sharp economic slowdown.

The dollar edged up, while the yen reached a six-year low. Oil snapped a three-day drop but remains down more than 10% for the week.

The key question for markets remains whether the U.S. central bank can tackle the fastest inflation in four decades without triggering a sharp growth slowdown or even a recession. The commodity shock from Russia’s war in Ukraine is aggravating prices pressures and economic risks.

“The overall message you got from the Federal Reserve today was very clear,” Alan Ruskin, chief international strategist at Deutsche Bank AG, said on Bloomberg Television. “They want financial conditions to tighten. The issue there is, can you soft-land this thing? Historically, when the Fed tightens, you do get some hard landing somewhere.”

The Fed said it would begin allowing its $8.9 trillion balance sheet to shrink at a “coming meeting” without elaborating. The U.S. central bank is among a number from Brazil to the U.K. that are raising borrowing costs

After the latest bout of peace talks, a Russian spokesman said a neutral Ukraine with its own army is a possible compromise, while Kyiv said it needs security guarantees. President Joe Biden said the U.S. would send Ukraine drones and thousands of anti-aircraft and anti-tank missiles.

In cryptocurrencies, Bitcoin joined in the risk-asset rally and was trading around $41,000.