Stocks and sovereign bonds remained under some pressure Tuesday as Russia’s war in Ukraine and the risk of aggressive U.S. monetary-policy tightening to quell inflation sapped sentiment. 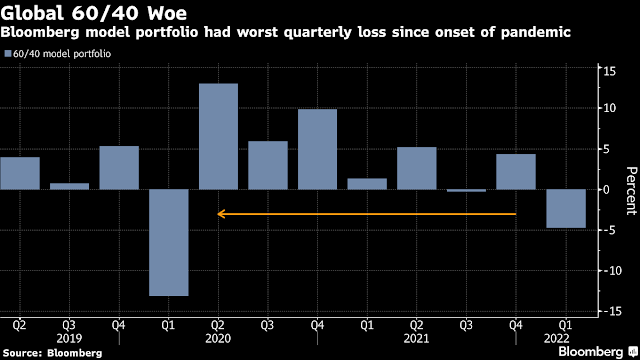 Shares were mixed in Japan and retreated in Australia and South Korea. A rout in Chinese technology shares deepened on Wall Street, portending more challenges for Hong Kong’s bourse. U.S. contracts fluctuated following a drop in American shares that left the Nasdaq 100 in a bear market.

Australian and New Zealand yields jumped and Treasuries held losses ahead of the Federal Reserve’s expected interest-rate liftoff on Wednesday. The 10-year U.S. yield is close to highest level since 2019. The dollar was steady.

Elevated commodity costs due to supply disruptions stemming from Russia’s invasion are fanning price pressures. That backdrop is adding to the case for Fed tightening even as it also heralds risks for economic growth.

Oil’s rally continued to ease, though prices remain above $100 a barrel. Traders are assessing talks between Ukraine and Russia that could alleviate the conflict. Meanwhile, Covid lockdowns in China pose risks to demand.

Traders have begun to price in a more forceful path for Fed hikes and now expect about seven quarter-point moves in 2022. Inflation was already high before the war and sanctions on Russia sparked a commodity shock, aggravating global economic challenges and creating a parlous environment for both stocks and fixed income

“The poor stock market just can’t catch a break,” Susquehanna International Group derivatives strategist Chris Murphy said on Bloomberg Television. “You get oil down $8 or $10 and now everyone is worried about U.S. Treasury yields. That just kind of points to -- there are a lot of issues to be dealt with. When one goes to the back-burner, something else pops up.”

In China, investors are awaiting key economic activity data and the central bank’s decision on the rate for one-year policy loans. While the Fed and a clutch of other monetary authorities are tightening policy, calls are growing for China to ease to shore up the economy.

Meanwhile, Russia has started the payment process of two bond coupons due this week. Investors are waiting to see if the nation defaults after the U.S. and its allies froze Russia’s foreign-currency reserves.

Elsewhere, nickel trading will resume on the London Metal Exchange on Wednesday, over a week after being suspended amid a historic short squeeze.

The panoply of risks, from geopolitics to the threat of policy errors as central banks grapple with high inflation, suggests more volatility lies ahead.

“It’s going to take a while to tame inflation,” Kathy Entwistle, managing director at Morgan Stanley Private Wealth Management, said on Bloomberg Television. “The regular consumer is the one that is going to feel it the most this year. And they’re the ones who held up the markets last year.”