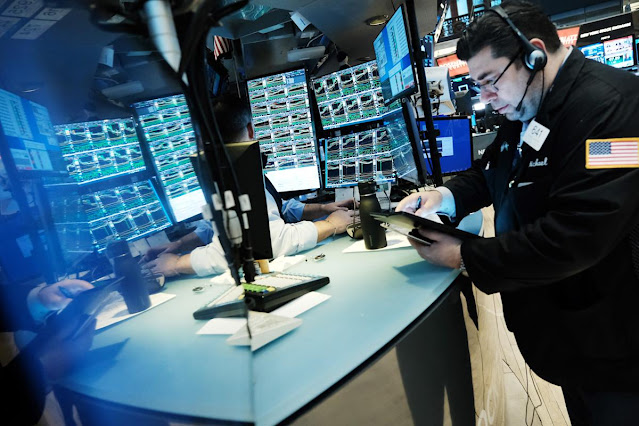 Contracts tied to the S&P 500, Dow and Nasdaq were firmly in the green at the start of futures trading after all three indexes rebounded in the final 30 minutes of Wednesday's main session from an initial decline in the immediate aftermath of the Fed's latest policy decision released at 2 p.m. ET.

At the end of its two-day policy-setting meeting, the central bank revealed it will lift the benchmark Federal Funds Rate by 0.25%, to a target range of 0.25% to 0.50%. The move was in line with what market participants had anticipated after Fed Chair Jerome Powell indicated in Congressional testimony earlier this month a 25-basis-point bump was distinctly possible.

​​“By raising interest rates, the Federal Reserve has begun the process of unwinding their pandemic-era stimulus measures in an effort to tame inflation,” Bankrate chief financial analyst Greg McBride said in a note. “This isn’t a one-and-done but the start of a series of rate hikes for the remainder of this year and well into next.”

The Fed also unveiled in its updated Summary of Economic Projections, or "dot plot," which reflects the individual economic projections of policymakers on the Federal Open Market Committee, that the median member anticipates up to six more rate hikes in 2022, which would bring rates 1.75% higher at the end of this year. Before Wednesday’s decision, the benchmark interest rate was deliberately held near zero since mid-2020 as part of the Fed’s easy-money policies used to keep financial conditions running smoothly during the pandemic.

“The Fed didn’t rock the boat much,” LPL Financial chief market strategist Ryan Detrick said. “Yes, they lowered economic expectations in 2022 while also increasing inflation, but much of that was already priced into things. Overall, they still see strong growth, which helps support the recovery.”

Although the key decision provided some clarity to investors who for months have awaited for the central bank to take steps forward on tightening monetary conditions, the Fed’s path forward remains muddied by geopolitical turmoil in Eastern Europe. War in Ukraine and penalizing sanctions against Russia for its invasion of the country have raised uncertainty in recent weeks over the conflict’s toll on the global economic picture.

The Fed acknowledged in a statement that came out of its meeting that implications for the U.S. economy are “highly uncertain” but likely to worsen already decades-high inflationary pressures.

“Playing catch up is the theme that Fed officials signaled to markets today as the narrative has shifted from normalizing monetary policy to laying the groundwork for a more restrictive policy and moving beyond neutral,” Allianz Investment Management senior market strategist Charlie Ripley said in commentary.

Elsewhere in markets, shares of Warren Buffett's Berkshire Hathaway closed at $500,000 for the first time on Wednesday. The price underscored Berkshire's status as a defensive stock at a time markets have been roiled by economic and geopolitical uncertainty.

Berkshire's Class A shares have advanced 10% in 2022, even as the S&P 500 is down about 12% year-to-date. Prior to a relief rally on Wednesday, the benchmark index on Tuesday (the 50th trading day of the year) locked in its 6th worst start to a year ever, data from LPL financial reflected. The silver lining? The previous five worst starts were followed by notable gains, with an average gain for the rest of the year of 36%, with the exception of only 2001.

“Although we aren’t expecting 36% gains the rest of this year, it does suggest that things might be quite bad now, but we’ve been here before and we’ve seen stocks come back way more than expected,” LPL’s Detrick said.