Wall Street’s main benchmarks were little changed at the start of overnight trading Monday after stocks closed mostly lower to start the week. Investors continued to monitor the Russia-Ukraine war and braced for a key monetary policy decision due out of the Federal Reserve Wednesday that could place short-term interest rates above near-zero levels for the first time since 2018. 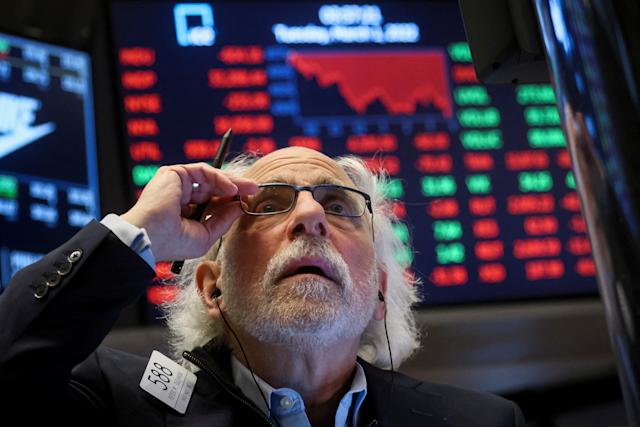 Contracts on the S&P 500, Dow Jones Industrial Average and Nasdaq Composite ticked up slightly at the open after the S&P 500 logged a “death cross” — when the 50-day moving average closes below the 200-day moving average. The Nasdaq extended its slide into a third day to cap the earlier session and the Dow rounded Monday out flat.

Meanwhile, commodities extended a streak of gyrations. WTI Crude Oil futures settled at $103.01, notching a two-week low after skyrocketing to trade as high as $130 last week. Futures tied to palladium, widely mined in Russia and used in electronics, dentistry and medicine, plunged 15% to mark the biggest drop since 2020’s COVID sell-off.

“I fully expect crude oil is going to go back towards $40 or $50 a barrel,” Bloomberg Intelligence’s Mike McGlone told Yahoo Finance Live Monday. “From this war, I think we’re going to see a significant amount of demand destruction.”

Markets may be little-shocked when central bank officials unveil the upshot of their two-day policy-setting meeting Wednesday after Federal Reserve Chair Jerome Powell signaled in recent Congressional testimony that he supports an increase of 0.25%. But traders will watch closely for possible changes to the Fed’s outlook on hiking plans for the remainder of 2022 as war in Eastern Europe hangs over the global economy.

Although Russia’s invasion of Ukraine has curbed the chances of a 50-basis point hike this month, escalating geopolitical turmoil — with no off-ramp in sight — raises a new set of uncertainties for the U.S. economy and complicates the Fed’s path forward on taming inflation.

“All signs point to a quarter-point interest rate hike from the Federal Reserve when their meeting concludes Wednesday,” Bankrate chief financial analyst Greg McBride said in a note. “The questions revolve around how many more are to come and how quickly.”

“The war in Eastern Europe gives the Fed reason to act more cautiously, but they will still be working to corral what is already the highest inflation in 40 years,” McBride said.

“Central bankers face a conundrum,” he said. “All things considered, I have no doubt this is one of the most important Fed meetings in recent memory given the current pace of market developments and the fluid nature of geopolitical events.