Oppenheimer Bets on These 2 Stocks; Sees Over 40% Upside Potential

The markets were already on shaky ground at the onset of 2022, but Russia’s invasion of Ukraine has ramped upped the volume significantly. 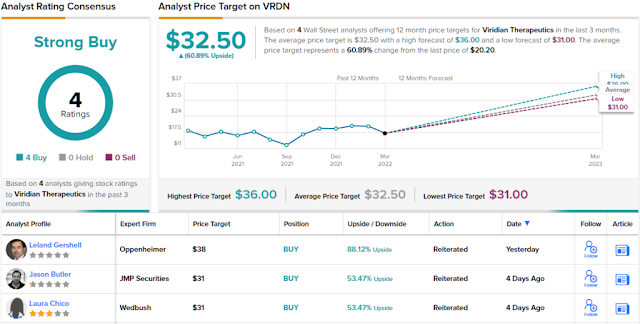 Apart from specific segments that could benefit from the ongoing invasion -- defense and energy stocks with little exposure to Russia readily come to mind -- most segments are in risk-off mode, while the market is spooked by soaring commodity prices, with the added danger of US inflation hitting its highest level in 40 years not making the macro conditions any easier to forecast.

So, everyone is psychologically prepared for another leg down. That said, if technical indicators are anything to go by, Oppenheimer’s Head of Technical Analysis Ari Wald thinks a relief rally could be in the cards.

“The NASDAQ-100 is trading 11% below its 200-day average. Over the last 30 years, the index only traded with a significantly lower deviation in 2000 and 2008,” Wald explained. “However, in both cases, a countertrend rally developed from similar conditions as now. The point is that, even if we assume the worst, we think tactical conditions are currently more favorable than not.

Against this backdrop, the analysts at Oppenheimer have pinpointed two stocks which they see as yielding at least 40% returns over the coming months. We ran the tickers through the TipRanks database to get a fuller picture of their prospects. Turns out both are rated as Strong Buys by the analyst consensus with solid gains projected too. Here are the details.

Let’s start off with Viridian Therapeutics, a biotech company focused on the development of treatments for patients suffering from serious yet underserved diseases. Presently, the company’s pipeline is mostly based on treatments for TED (thyroid eye disease) patients, all in various stages of development.

The most advanced candidate is VRDN-001, a monoclonal antibody that has a sub-nanomolar affinity for the IGF-1R signaling pathway and inhibits it. The treatment is currently undergoing a Phase 1/2 clinical trial with topline proof of concept data slated for a readout in Q2

Should the trial yield positive results, the company plans to move quickly to investigate lower dosages and longer treatment intervals in new TED cohorts, with the goal of distinguishing vs. Horizon Therapeutics’ Tepezza, the sole product approved for TED.

Further behind in development is VRDN-002, a next-generation IGF-1R antibody intended as a low-volume, subcutaneous (SC) injection, also for the treatment of TED. Late in January, the FDA gave its nod of approval for the investigational new drug (IND) for the candidate and Viridian has begun to enroll for the Phase 1 SAD (single ascending dose) trial. A data readout is anticipated midway through the year.

Given that in only its second-year on the market Tepezza generated US sales of $1.7 billion, Oppenheimer’s Leland Gershell thinks signs are encouraging for Viridian’s offering.

“Like Tepezza, VRDN's VRDN-001 is an intravenous IGF-1R antibody, and initial clinical data in TED are expected in 2Q22. With HZNP projecting $3B+ peak US sales for Tepezza, we see ample revenue potential for '001, and its higher potency may enable differentiation,” the analyst said. “We expect that progress in the development of VRDN's TED candidates will support outperformance.”

Gershell’s colleagues unequivocally agree. Based on Buys only - 4, in total - the stock has a Strong Buy consensus rating. The average price target stands at $32.50, and should it be met, investors will be pocketing gains of ~61%. (See Viridian stock forecast on TipRanks)

The next stock we’ll look at also operates in the pharma industry. As Sierra Oncology’s name implies, the company is focused on finding therapies for cancer, of the rare kind.

Sierra has several candidates in its pipeline, mostly in the early stages of development, but its leading candidate momelotinib (MMB) completed a Phase 3 study (MOMENTUM) last December. The drug has been indicated to treat myelofibrosis (MF) patients who had prior treatment with an approved JAK inhibitor. The company announced topline results at the end of January, which were excellent with the trial achieving the primary endpoint and key secondary endpoints. Sierra plans on submitting with the FDA an NDA (new drug application) in the second quarter, when it will also ask for a priority review.

Following the release of the positive top-line results, the company boosted its financial position in 1Q via a public offering and debt financing, building on the $104.7 million of cash and cash equivalents it held as of the end of 2021.

Oppenheimer’s Jay Olson believes an approval is “likely to happen in 1H23,” and thinks the cash boosting move “should provide additional flexibility” to execute the launch of momelotinib next year.

Additionally, the company intends to kick off a Phase 2 study of SRA515 - a selective BRD4 BET inhibitor - in combination with MMB in 1H22, also for the treatment of MF.