The all-new BMW M2 has broken cover at the famous Nurburgring circuit in Germany. As our spy pictures show, a disguised version of the near production-ready high performance flagship has been testing at the fearsome 12.9-mile long circuit

Due to hit showrooms this year, just in time for BMW’s 50th anniversary of its M division, the new M2 is based on the recently launched 2 Series Coupe. Yet as our images show, the M2 gets an aggressive new look. Look past the camouflage of this prototype and it appears the new M2’s design is near-enough finalised.

At the front, there’s a new bumper with a lower splitter and more vents, while the rear end gets an enormous diffuser complete with BMW M’s trademark quad-exit exhaust tips. The side skirts are also lower and there’s a new ducktail spoiler on the bootlid. There’s a wide stance set off with larger wheels than the M240i, while it's likely that the new M2 will have even wider wheel arches than its predecessor.

The outgoing BMW M2 remains one of the most exciting compact sports cars, while the recent CS version has taken the manual, rear-wheel drive, straight-six formula to another level - although the extra cost is hard to swallow. However, the good news for BMW M purists is that the new one is likely to retain all of the old car’s key attributes, but deliver even more performance.

The previous-generation M2 was a key model for BMW’s M division. Back in 2018, the brand labelled the car as its “strongest growth driver,” so the success of this new model is vital, even though the firm’s portfolio has since expanded to include more popular performance vehicles, such as SUVs and even electric cars. 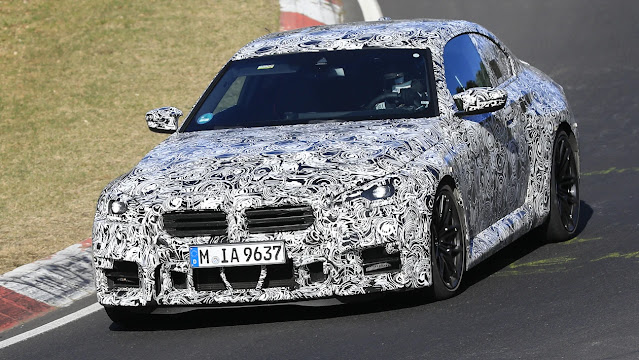 BMW’s latest M2 prototype isn’t wearing the heavy body cladding of our previously snapped test cars, which gives us a detailed look at the cosmetic tweaks the company’s performance arm have made to the flagship model’s design.

Up front, there’s a new bumper with a lower splitter and more vents, while the rear end gets an enormous diffuser complete with BMW M’s trademark quad-exit exhaust tips. The side skirts are also lower and there’s a new ducktail spoiler on the bootlid.

BMW’s next M2 will take advantage of the fresh platform found under the new 2 Series coupe, which was derived from that of the 3 Series. However, there’ll be significant changes over the powertrains and chassis in the standard 2 Series.

Power should come from BMW M’s latest turbocharged 3.0-litre straight-six petrol engine, found in the likes of the X3 M and X4 M performance SUVs. Codenamed S58, the unit develops 503bhp in BMW’s flagship Competition trim but, so the M2 doesn’t tread on the toes of its larger (and more expensive) siblings, we expect BMW will limit the coupe’s output.