Fund Managers Run Away From China Stocks Even With 75% Discount

Fund managers are leery of buying Chinese stocks as the country’s close ties to Russia, extreme Covid-19 curbs and lack of clarity on the end of regulatory crackdowns overwhelm the dip buying opportunity presented by the 75% plunge from their peak. 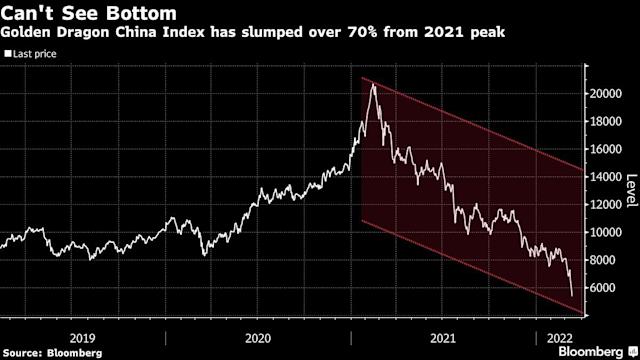 Most of the investors interviewed by Bloomberg are hesitant to dive into the weakness even as valuations slump to the lowest levels in more than a decade. Some are planning to hold on to their existing positions, but few are looking to add.

“We are still avoiding Chinese stocks,” said John Plassard, a director at Mirabaud & Cie. “There are too many question marks.” Mirabaud sold its Chinese equity positions last year and has not returned to them, he added.

The Nasdaq Golden Dragon Index, home to the likes of Alibaba Group Holding Ltd, Baidu Inc. and NetEase Inc., slumped 11.7% Monday and has plunged a whopping 29% over the last three sessions to the lowest since July 2013. Chinese stocks listed in Hong Kong also sold off Monday, posting their worst day since the 2008 global financial crisis.

The slump came after U.S. officials said that Russia had asked China for military assistance in its war against Ukraine. China denied the report, but traders worry that any sanctions against Beijing could worsen supply chain constraints and hit global growth.

It’s the concerns about Russian sanctions spilling over to China that’s putting pressure on Chinese equities, according to Jian Shi Cortesi, who manages China and Asia equity funds at GAM Investments. The turning point will only come when selling in the American depository receipts are “exhausted” and the Ukraine situation is resolved, she said.

Cortesi declined to comment on any portfolio changes at GAM.

What’s more, sentiment has also been hurt by a Covid-induced lockdown in Shenzhen, a key tech hub just outside Hong Kong, and the northern province of Jilin.

“Investors are likely to demand a long period of calm before returning en masse to the country,” said Julien Lafargue, chief market strategist at Barclays Private Bank. “With so many factors at play putting renewed pressure on Chinese equity markets, it’s not surprising to see the local assets underperform many global peers.”

For Peter Kisler, a portfolio manager at Trium Capital, that makes this a good time to raise exposure to Chinese tech companies.“We are adding to our position today as it seems we are seeing liquidation go through,” Kisler said. “I think the drop in Russian shares to zero has scared a lot of investors, who now see a non-trivial risk of the same happening in China.”

Xiadong Bao, an emerging-markets fund manager at Edmond de Rothschild Asset Management, is slowly adding positions, but said “it seems too early to turn positive given the multiple subjects we have here.

Meanwhile, most fund managers are sitting on their hands -- at least for now.

“It would still be rash to catch the falling knives” in Hong Kong, even as the city’s equity market is showing some signs of capitulation, Bocom International wrote in a note.