We experience Ford's new all-electric truck from the passenger seat as engineers put it through the wringer in nasty winter conditions.

Ford's upcoming F-150 Lighting sounds like a legitimately transformative product. This all-electric truck has respectable range, is surprisingly affordable in its base form and should offer all the features, ruggedness and capability F-Series customers expect. In fact, some 200,000 eager beavers have already plunked down money to reserve one. But despite the Lightning's myriad benefits over combustion-powered pickups, it is still an EV, which means cold weather use could be a serious issue. 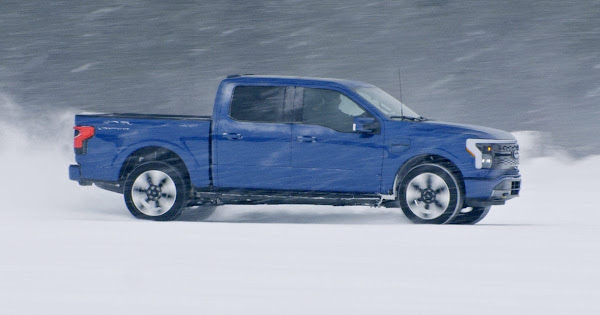 To see how this battery-powered F-150 handles winter's worst, Ford invited me to Michigan's remote -- and frigid -- Upper Peninsula for some exclusive passenger-seat time in the truck. And yes, you read that correctly, passenger seat time. Ford wouldn't let me climb behind the wheel when the truck was revealed last spring and I was barred from the captain's chair again. Still, there is plenty you can glean from an extended ride-along.

For starters, the Lightning is a stable and planted pickup, even when driven in a way you'd never do on public roads. Cameron Dillon, a powertrain calibration engineer at Ford, demonstrated how agile this all-electric pickup is by sliding it around a groomed snowfield. This gigantic -- and slippery -- surface gave him plenty of space to get the truck sideways, which he had no trouble doing.

"I laugh, because my brother, he always tells people that for my job I just come up north and drift cars around," Dillon said while drifting the Lightning. "So, there's some truth to that for sure." Dillon's been working on fine-tuning how this truck puts power to the pavement -- or in this case, to hard-packed snow and ice -- to make sure it responds intuitively and precisely to driver commands.

What's particularly interesting about this demonstration is that our steed has not been treated to any special modifications to increase its performance. "So, everything [we're] doing today, this truck is strictly production," noted Dillon, which means owners will be able to switch traction and stability control off at the push of a button if they want to get squirrely.

"So, what we're doing to change the response of the vehicle is strictly shifting the power from the front and the rear, to change how the vehicle is behaving," explained Dillon, "[and] the heart of it is, these controls are active all the time." Even from the passenger seat you can tell this truck's electric drivetrain reacts immediately to inputs, since there are no camshaft phasers to deal with, ignition timing to adjust, turbo boost to manage or even a transmission; all the normal complexities associated with internal combustion are gone.

The Lightning features a pair of three-phase, fixed-magnet AC electric motors, one at the front and another at the rear. This gives the truck up to 563 horsepower and 775 pound-feet of torque when fitted with the extended-range battery pack, which should be able to go up to 300 miles between charges. The standard battery assembly is estimated to offer 230 miles of range with a still-potent 426 hp and the same measure of torque. For particular gnarly situations, the Lightning also offers a locking rear differential.