In crypto, the land of the pseudonymous, dating back to the space’s masked founder Satoshi Nakamoto, asking for personal information is often considered a dealbreaker.

So when Bored Ape Yacht Club, perhaps the world’s most well-known NFT collection, dropped a link on their Twitter account which asked people for their passport details, real names, addresses, and even selfies, they unsurprisingly met strong pushback. 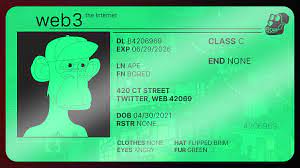 “BAYC is asking people for KYC now…” tweeted the crypto influencer who goes by theweekend.eth. “It’s a wrap for Bored Apes.”

The negativity towards Bored Apes was exacerbated by the lack of details about the project for which this personal information is being collected.

“I think the backlash is mostly because most people in the NFT space are for new fundamentals for web3. And this is web2 fundamentals,” OKHotshot, an on-chain analyst who helped expose the Naruto NFT scam, told The Defiant. “You sell your data, you don’t know what you’re getting back. We don’t really like that.”

Downward price action may have also made for an unforgiving environment for the KYC news. The floor price for BAYC NFTs has dropped 35% to 76 ETH as of Mar. 11 since its Feb. 1 high of 116.9 ETH, according to a Dune Analytics dashboard.

When the Apes were riding high, perhaps the project could have persuaded people to submit their information with less hesitation, but a bearish environment tends to make people skeptical.

In the wake of the fallout, Yat Siu, co-founder of Animoca Brands, which partnered with BAYC on the as yet undisclosed initiative which requires KYC, posted a thread on Twitter.

He said that neither Animoca nor BAYC can see users’ personal information. According to Siu, a third party called Blockpass “destroys the data after verification and only stores an anonymous representation of your data.”

Users anticipating either a play-to-earn game or a fungible token for BAYC will be disappointed as the brand has denied that the stealth project is directly connected to either venture.

With those two options ruled out, OKHotshot thinks the bar to deliver is pretty high. “It’s got to be something special if you’ve got to give up your privacy for this,” the analyst said.