Bitcoin Worth $1.2B Leaves Coinbase in a Sign of Persistent Institutional Adoption

That's evident from the recent large outflow of coins from the U.S.-based crypto exchange Coinbase (COIN), according to blockchain analytics firm Glassnode. 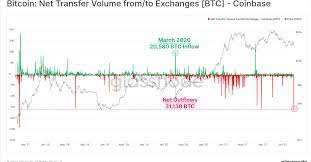 "Large outflows like this one are actually part of a consistent trend in the Coinbase balance, which has been stair-stepping downwards over the last two years," Glassnode said in a weekly newsletter published Monday.

"As the largest exchange by BTC balance, and a preferred venue for U.S. based institutions, this further supports the adoption of bitcoin as a macro asset by larger institutions."

The past week's outflow has pushed the number of coins held on the Nasdaq-listed exchange to a four-year low of 649,500 BTC.

The balance held across all centralized exchanges has dropped to 2,519,403 BTC, the lowest number since November 2018.

The declining exchange balance means fewer coins are available for liquidations on the exchange.

In other words, the sell-side liquidity is drying up, suggesting scope for a sharp move on the higher side, especially as the coins withdrawn from Coinbase were moved to a largely inactive wallet.

"If we look at the Illiquid Supply Shock Ratio (ISSR), we can see a significant uptick this week, suggesting that these withdrawn coins have been moved into a wallet with little-to-no history of spending," Glassnode said.