Unboxing the new 24-inch Apple iMac, all I could think was that my old curved-back 27-inch iMac was a dead man walking. The long-standing iMac design, virtually untouched since 2012, held up well over the years, but a change was well past due. The new version of the smaller iMac model (formerly 21.5 inches, now 24 inches) has a slim, refreshed design, and is available in a wide variety of colors. It feels especially fresh as this is the first Mac with a ground-up new design to go with its new M1 CPU/GPU platform. The new models go on sale on May 21. 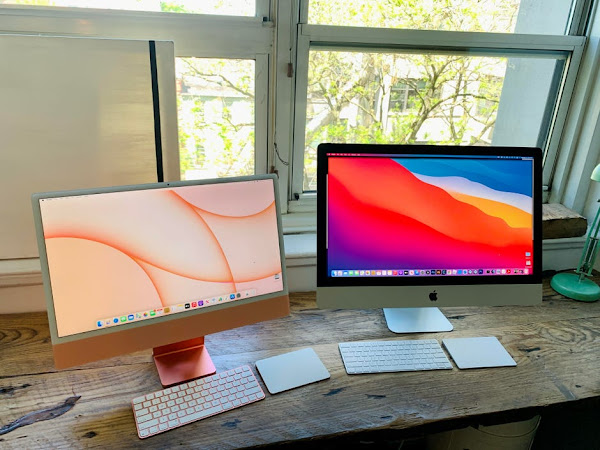 An ongoing evolution is happening across the overall Mac line, and it's easily the biggest change since Macs added Intel processors in 2006. The entire lineup, laptops and desktops, are in the process of dropping Intel CPUs for Apple's own design. The transition started in late 2020, with the Apple M1 versions of the MacBook Air, 13-inch MacBook Pro and the Mac Mini.

The question was, which Mac would make the jump to M1 next? It turned out to be the smaller of two iMac models, along with one of Apple's new iPad Pro tablets. Formerly an all-in-one desktop with a 21.5-inch screen, this is now the 24-inch model, fitting a larger display into a similar footprint, thanks to thinner screen bezels and other design tweaks.

The iMac aesthetic for almost 10 years has been a large display, gently bowed out on the back, tapering to a sharp edge and perched on a single curved foot. Now we have a flat body, similar to a computer monitor, with squared-off edges. Contrasting colors highlight a slimmer screen bezel, instead of masking it in black. It's more colorful, but at the same time less organic. 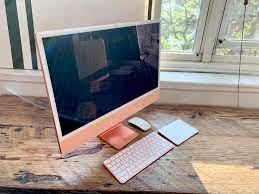 The power cable has been redesigned and now attaches magnetically. It's in a similar spot as on the previous iMac design, allowing the cable to fit through a hole in the stand for tidy routing. The magnetic connection is a clever concept, but don't mistake it for Apple's old MagSafe laptop cables. The connection is tight enough that I don't think it would harmlessly pop out if you tripped over it, although I have yet to put that to the test.

The iMac's built-in Ethernet port has also been banished to the power brick, something I've only seen a handful of times over the years. Just be sure to note that on the base $1,299 (£1,249, AU$1,899) iMac, you have to add an extra $30 to get that Ethernet port version of the power brick.