We take a spin in Volkswagen's vibrant ID Buzz prototype ahead of its imminent debut.

The first thing to say about the ID Buzz is that it won't be available in this livery. Sorry. I realize this will be a source of great woe for many, because it looks fab. In fact, I'm not sure I've seen a more attractive camouflage. Yes, camouflage. This bright, rainbow sticker set comes under the heading of a disguise. In a world inhabited by unicorns and Scooby-Doo, maybe it would go unnoticed. In Milton Keynes, England, it stood out like a sore thumb. 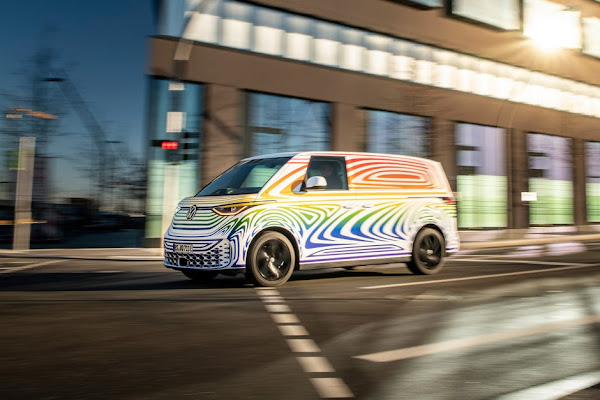 Anyway, the all-electric ID Buzz and ID Buzz Cargo are based on VW's MEB platform, which has so far spawned the ID 3 and ID 4. As such, the initial specs are fairly familiar, with a 77-kilowatt-hour battery powering a synchronous motor mounted on the rear axle, putting out 201 horsepower and 229 pound-feet of torque. No range has been declared yet, but based on the identically propelled ID 4, the van should be able to drive around 310 miles on the optimistic European WLTP cycle. (The rear-wheel-drive US-spec ID 4 is rated at 268 miles.) Top speed is said to be 90 miles per hour and other variants will of course be available down the line.

Trying to look past the stripes (which give the front of the Buzz something of a Grumpy Cat appearance), the proportions are appealing. The short overhangs and chunky volumes are nothing new in EVs, where the skateboard battery architecture pushes the wheels to the extremities. But somehow Volkswagen managed to imbue the Buzz with a great deal more character and charisma than the ID 3 or ID 4. The wheelbase is 117.6 inches in an overall length of 185.5 inches, with the width and height both coming in at just under 6 feet. For comparison, that's an almost identical wheelbase to VW's European T6 Transporter van, but in a package that is 8 inches shorter overall. In the Cargo version the load space is roughly 138 cubic feet and there are three seats up front.

It's worth noting that when it arrives in the US in 2024, the Buzz will only be available in the longer wheelbase (by about 10 inches) version with three rows of seats. No Cargo version, I'm afraid, due to the Chicken Tax. However, what should arrive in America with the Buzz is Plug & Charge. This allows the vehicle to transfer all the necessary data to the charging point when you plug in and then simply bill the appropriate account for the electricity used, simplifying the charging process enormously. Nifty.

Stepping up into the driver's seat, the view out the Buzz is instantly interesting because you feel further from the windscreen than in a conventional van. The point is emphasized by the addition of quarter lights to aid visibility. Overall it's a pleasantly commanding position and you instantly feel comfortable.