Lighter, sharper and a whole lot more fun, the GT4 RS is the ultimate expression of what a 718 Cayman can be.

One of my favorite automotive conspiracy theories is that Porsche intentionally holds the Cayman back to protect the sanctity of the 911. It's so silly. And after hitting the track in the new GT4 RS, I have to ask: How could a Cayman get better than this? 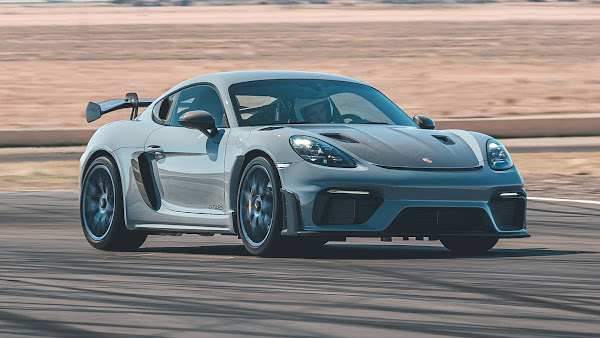 The RS is way more than just a hotter GT4, and we actually have the 911 to thank for much of this updo. Porsche incorporated the front end from a 991-generation 911 Carrera 4S into the GT4's body structure, helping to make the RS more rigid, but also allowing it to be fitted with an electronic front-axle lift -- something no other Cayman offers. The RS' hood and front fenders are made from carbon fiber, and the air vents in the wheel wells are great for both aerodynamics and brake cooling, plus they look rad as heck. Ditto the side air ducts that replace the Cayman's rear quarter windows.

Those side ducts feed a 4.0-liter naturally aspirated flat-6 engine, but it's not the same one used in the Cayman GT4. The RS gets the engine from the 992-generation 911 GT3 -- itself a version of the powerplant used in the 911 GT3 Cup race car -- which puts out 493 horsepower and 331 pound-feet of torque. Of course, it's not the numerical specs that really matter here. The linear power delivery screamin' 9,000-rpm redline are what make this engine such a peach. Combine that with side air intakes and the sound the thing makes at full wail is incredible.

You can only get the Cayman GT4 RS with Porsche's seven-speed PDK dual-clutch gearbox, and it has the same tuning as the transmission used in the most recent 911 GT3 RS. The shifter is the same faux-manual stick from the new GT3, and there are small paddles on the steering wheel if you feel like calling the shots. But lapping California's tight and technical Streets of Willow race track (in counterclockwise configuration, no less!), I never have the burnin' desire to take over shifting duties. PDK knows best.

The Porsche 718 chassis is one of the best out there, and it only gets better as you climb the Cayman hierarchy. The RS has unique dampers and significantly stiffer spring rates, both a boon for pancake-flat handling, but which will likely make this thing somewhat brutal on public roads. (It's an RS, what did you expect?) The retuned suspension means the RS sits 1.2 inches lower to the ground than a base Cayman, hunkered down on 20-inch center-locking wheels wrapped in 245/35 front and 295/30 rear Michelin Pilot Sport Cup 2 tires. Like the 911 GT3, supersticky Cup 2 R rubbers are available, though Porsche makes you get through the dealer, not the factory.