10 Important Cryptocurrencies Other Than Bitcoin

The Treasury Department prohibited the use of cryptocurrencies to circumvent U.S. sanctions. And on Monday, Bloomberg reported President Biden is expected to sign an executive order outlining the U.S. strategy on cryptocurrencies. 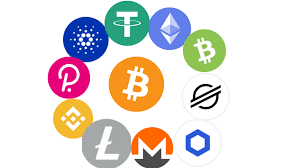 Bitcoin has not only been a trendsetter, ushering in a wave of cryptocurrencies built on a decentralized peer-to-peer network, but has also become the de facto standard for cryptocurrencies, inspiring an ever-growing legion of followers and spinoffs.

Before we take a closer look at some of these alternatives to Bitcoin (BTC), let’s step back and briefly examine what we mean by terms like cryptocurrency and altcoin.

A cryptocurrency, broadly defined, is virtual or digital money that takes the form of tokens or “coins.” Though some cryptocurrencies have ventured into the physical world with credit cards or other projects, the large majority remain entirely intangible.

The “crypto” in cryptocurrencies refers to complicated cryptography that allows for the creation and processing of digital currencies and their transactions across decentralized systems.

Alongside this important “crypto” feature is a common commitment to decentralization; cryptocurrencies are typically developed as code by teams who build in mechanisms for issuance (often, although not always, through a process called mining) and other controls.

Cryptocurrencies are almost always designed to be free from government manipulation and control—although, as they have grown more popular, this foundational aspect of the industry has come under fire.

The cryptocurrencies modeled after Bitcoin are collectively called altcoins, and in some cases, shitcoins, and have often tried to present themselves as modified or improved versions of Bitcoin.

Though some of these currencies may have some impressive features that Bitcoin does not, matching the level of security that Bitcoin’s networks achieve largely has yet to be seen by an altcoin.

Beyond that, the field of cryptocurrencies is always expanding, and the next great digital token may be released tomorrow.

Though Bitcoin is widely seen as a pioneer in the world of cryptocurrencies, analysts adopt many approaches for evaluating tokens other than BTC.

It’s common, for instance, for analysts to attribute a great deal of importance to ranking coins relative to one another in terms of market capitalization. We’ve factored this into our consideration, but there are other reasons why a digital token may be included in the list.